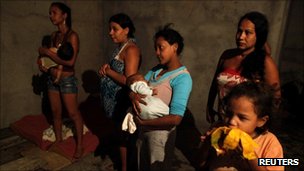 Despite a decade of progress, poverty is still widespread in Brazil

For the first time, non-white people make up the majority of Brazil's population, according to preliminary results of the 2010 census.

Out of around 191m Brazilians, 91 million identified themselves as white, 82m as mixed race and 15m as black.

The once-a-decade census showed rising social indicators across Brazil as a result of economic growth, but also highlighted enduring inequalities.

The census was conducted by the Brazilian Institute of Geography and Statistics (IBGE).

"It is the first time a demographic census has found the white population to be below 50%" it said in its report.

Among minority groups, 2m Brazilians identified themselves as Asian, and 817,000 as indigenous.

Much of the census data released reflects the progress Brazil during a decade of sustained economic growth and government policies aimed at reducing poverty.

However, in almost all fields of human development the census revealed enduring inequalities between north and south Brazil, between urban and rural areas, and between rich and poor.

The IBGE highlighted "acute income disparity" in Brazil, with the richest 10% of the population gaining 44.5% of total income compared to just 1.1% for the poorest 10%.

It said more than half of the population earned less than the minimum wage and, on average, white and Asian Brazilians earned twice as much as black or mixed-race Brazilians.

Brazil is one of the most ethnically-diverse countries in the world and many Brazilians regard their nation as a "racial democracy" where there is little overt racism.

Nonetheless black Brazilians - the descendants of African slaves brought over during Portuguese colonial rule - are much more likely to be poor and rarely reach the top levels of business or politics.