The Italian Paradox on Refugees - NYTimes.com

The Italian Paradox on Refugees 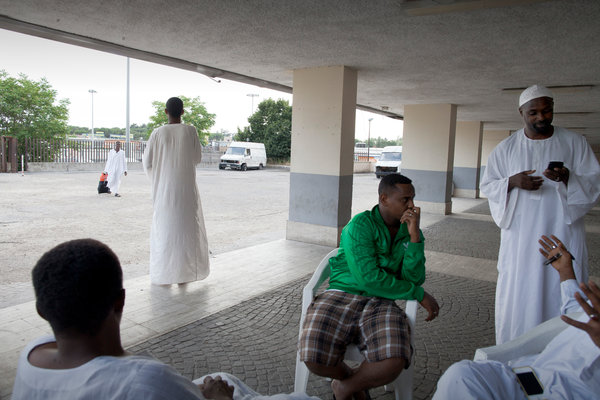 ROME — The abandoned building on the outskirts of Rome, colloquially known as the Salaam Palace, was once a sparsely populated shelter where new arrivals from Africa — fleeing war, persecution and economic turmoil — squatted to create their own refuge.

Over the years, scattered mattresses were joined by sloppily plastered plywood walls, slapdash doors and scavenged furniture. Today an irregular warren of cubbyholes includes a small restaurant and a common room. On a recent cold afternoon, a hammer clinked as a bathroom was added to a one-room home where an oven door was left open for heat.

Today more than 800 refugees inhabit Salaam Palace, and its dilapidation and seeming permanence have become a vivid reminder of what its residents and others say is Italy's failure to assist and integrate those who have qualified for asylum under its laws.

Salaam Palace and an expanding population in shantytowns elsewhere in Italy are the result of what refugee agencies say is an Italian paradox surrounding asylum seekers here. The country has a good record of granting asylum status, but a disgraceful follow-through, they say, characterized by an absence of resources and a neglect that adds unnecessary hardship to already tattered lives and is creating a potential tinderbox for social unrest.

"Italy is quite good when in the asylum procedure, recognizing 40 percent, even up to 50 percent of applicants in some years," said Laura Boldrini, the spokeswoman in Italy for the U.N. high commissioner for refugees. "What is critical is what comes after."

Italy has only about 3,150 spots in its state-funded asylum protection system, where refugees receive government assistance. Waiting lists are astronomical. "If you're not lucky to get one of those, you're on your own," Ms. Boldrini said. "You have to find a way to support yourself, learn the language, get a house and a job."

That has certainly been the experience of those in Salaam Palace. Some have been living in the abandoned university building since early 2006, when it was occupied by a group of refugees with the help of an organized squatters' association.

Most fled a life of war and hardship in Sudan and the Horn of Africa. Nearly all have refugee status, or some form of protection, but they have been unable to find steady work in Rome. Italy's economic crisis has made the challenge all the harder.

"We escaped one war to find another kind of war — 800 people crammed in a palazzo," said Yakub Abdelnabi, a resident of Salaam Palace who left Sudan in 2005.

Last summer, the Council of Europe commissioner for human rights, Nils Muiznieks, visited Salaam Palace and was struck by the "destitute conditions" of its residents and "the near absence of an integration framework" for refugees in Italy, according to a report issued in September.

Mr. Muiznieks "witnessed the shocking conditions in which the men, women and children were living in this building, such as one shower and one toilet shared by 250 persons," the report said.

Apart from volunteers, the residents had "no guidance" in finding work, going to school or dealing with administrative burdens. "This has effectively relegated these refugees or other beneficiaries of international protection to the margins of society, with little prospect of improvement in their situation," the report said.

To grant access to social assistance, the local authorities often demand documents that are impossible for the refugees to obtain. Occasional government-financed projects designed to remedy the situation have had negligible impact, residents said.

Though immigrants have access to medical care, many are leery of navigating the labyrinthine national health system, which is why on a blustery December day medical students had volunteered to provide flu shots to some residents of the Salaam Palace in an improvised health clinic, amid cigarette butts and empty beer bottles.

"This is the worst time of the year, when the risk of epidemic is high," said Dr. Donatella D'Angelo, president of a volunteer association that provides weekly health care at Salaam Palace.